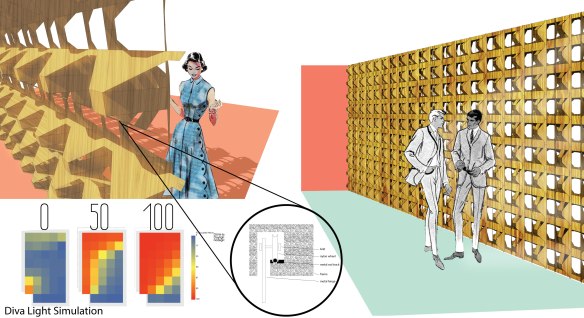 What if you could have light and shade just by touching the system?

This is the thought that fueled our ideas. We wanted something that could open and close with the ease of a finger.

This iteration kept us interested enough to play with other shapes. We wanted to take it to the next level by making an interesting geometry. In order for this same effect to carry onto a different geometry we had to know how it works. We realized that if you take a shape and repeat it then you have a geometry, now if you take the geometry and mirror it then you have a volume. At the intersection of the mirror is where the joint resides. We started playing with tessellated patterns..

We realized that by making arbitrary geometries we were jumping ahead of ourselves. We were cutting out of a shape that we did not even know. We took a step backwards and made this shape to see how it works on its own.

We liked the way this looked; however, we realized it could work even better if all the systems were connected so that they weren’t independent of each other. Less failure points

We also tried this method on the triangular volume

We lied the other shape better and are currently working on improving the amount of light that comes through it, as well as the aesthetic

From the most recent test model, we have discovered the last few issues that kept the model from moving smoothly: the geometry of the fins and an actuator that will operate all rows simultaneously.

The geometry was resolved by folding out the flaps on the outer edge of the fins. This not only made the height of the fins smaller but also the shielded from the sunlight more. From an aesthetics perspective, the fins look more fleshed out and dimensional. 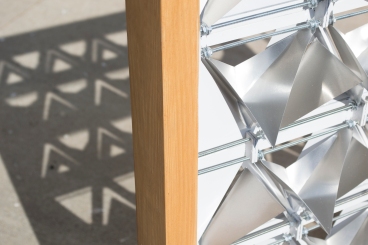 To operate one row, the handle must be fixed to the rod as well. By giving thickness to the handle and imbedding two nuts into the sides, we have accomplished this. One system can operate every other row, be it all rotating upwards or be it rotating all downwards. Therefore, there are two systems to operating from the same center point in opposing directions. To connect the handles, a dowel is attached to all handles. This connection must have allowance for rotating the handle. 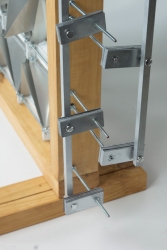 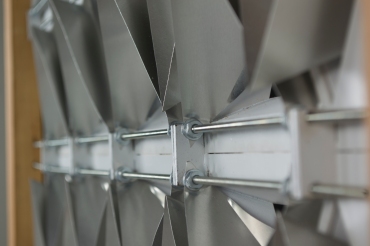 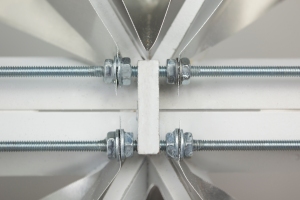 TSS in context with the Museum of Fine Arts, Houston.

by Ana Escobar and Eryka Bueno

Flexinol Wire is a Shape Memory Alloy that contracts like a muscle when heated. These wires perform physical movement across extremely wide varieties of applications. This ability to flex or shorten is a characteristic that dynamically changes its internal structure at certain temperatures. The Flexinol can contract around 10% of its length when heated and can then be easily stretched out again as it cools back to room temperature.

Far more important to note is how the wire is physically attached and made to operate. Essentially, the Flexinol wire acts as the sensor, processing device, and actuator all-in-one.

We designed an origami-like shape organized in a vertical structure that was influenced by a system of expansion and contraction.

We started experimenting with the Flexinol wire and different shapes to learn what was the best geometry and position for the movement. We learned a triangle geometry would be best in combination with the Flexinol.

We experimented with different shapes that could create a tessellation. 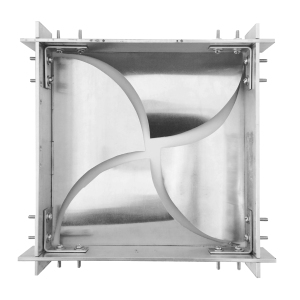 The use of aluminum flat bar and aluminum sheet seemed the best option for our design, since we needed a material that would look elegant and light enough for the Flexinol to move. Here, we were experimenting with connecting of materials and how it would be built. 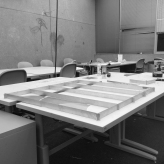 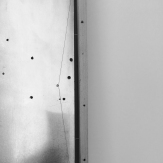 For one module, we used seven aluminum flat bars in total for the frame. We used the chop saw to be able to cut a slice from each end to connect the flat bars together. The sanding machine was used after to give it a clean finish. After, we used the power drill to place all the corner braces together and strengthen the structure of the frame. Next, the fins were cut using a band saw to form the curved shape. Lastly, the power drill was used to install the hinges and small eye hooks for the placement of the Flexinol wire.

Completed the fabrication of the module and successfully established the movement  of all the fins with the Flexinol wire, creating a stellar shading device that will produce unique shadows and lighting conditions for the interior of the building